My Grandma Kadel had a story to tell. Raised outside Harrisburg, Pennsylvania, and educated as a nurse, she married a boy she’d met at church camp who was studying to be a minister. He planned to be a small-town preacher, and she planned to be a small-town preacher’s wife. But World War II intervened, sending them to Florida, where my grandpa became a highly respected army chaplain and part-time minister at a large Tampa church. Over the years, his reputation grew, and my grandmother’s responsibilities grew along with it. Before she knew it, she was the wife of a college president, with faculty and students to care for, as well as her own four children. It wasn’t the life she had planned, but whose life ever is?

I didn’t know many of these details of my grandmother’s life when I asked her to let me interview her, on tape, in 1997. She was eighty-three, and she protested, “I don’t know that I have anything to tell you.” But with gentle persuasion, I got her talking. We spent three days together, sitting quietly in her living room, as she reminisced about childhood days, her parents’ relationship, her caregiving roles, her husband’s death, her life of faith.

I had been trained as an interviewer while earning my doctoral degree at Syracuse University, and I knew how to put people at ease and draw out their memories and stories. I was also working as a professional writer when I began this project, so I had the skills to complete my grandmother’s life story as a book that the whole family could appreciate. And they did. My grandmother relished the attention she received from children and grandchildren as they read her story and then talked with her about it.

That’s when I realized that other families could benefit from the same process. I started TimePieces Personal Biographies in 2000 so that I could offer my services to other people who want to tell, record, and share their life stories. Every project reminds me of the value of my mission. Whether I’m helping to tell the life story of a seventy-five-year-old artist, the reflections of a retired high school teacher, or the memories of a young mother whose daughter died unexpectedly, I am continually moved by the power of stories to heal, honor, communicate, and bind us together.

My Grandma Kadel died in March 2004, just a few weeks shy of her 90th birthday. The book I’d written years before turned up in the hands of my relatives at the viewing and the memorial service. We used it to reminisce about her life, and the officiating minister used it to prepare his remarks. Since then, my aunts have asked for additional copies to give to their grandchildren, so the next generation will always remember their great-grandma.

Life stories have a long life of their own. I look forward to talking with you about the stories you would like to preserve. 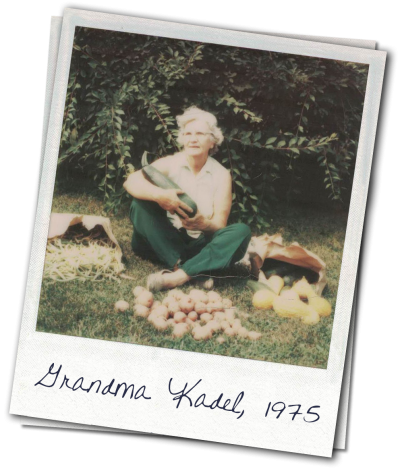